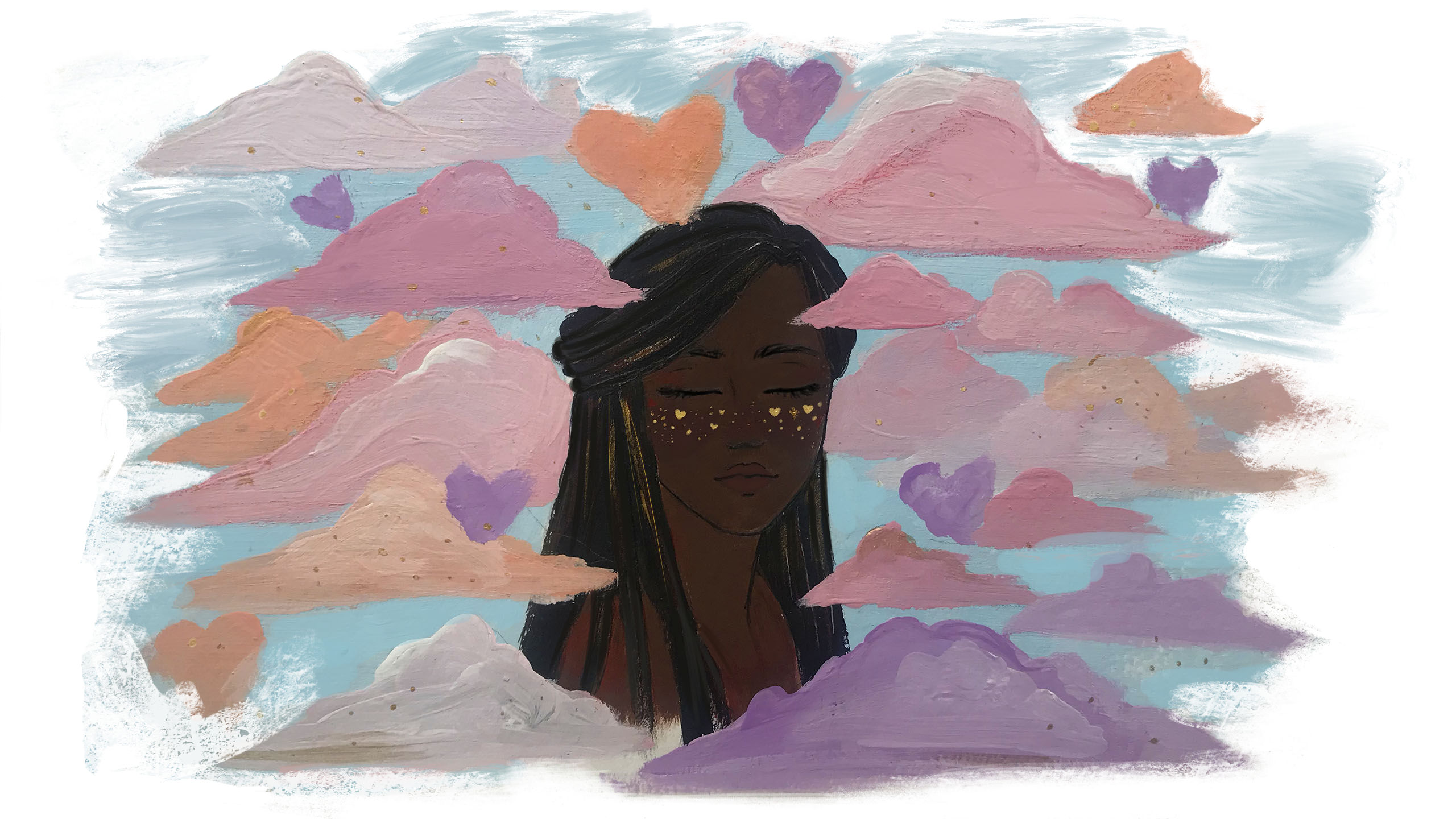 Can you be in love with love itself?

Isolation has changed dating for the worse, but maybe it’s still possible to find romantic fulfillment without a partner

Can you be in love with love itself?


Isolation has changed dating for the worse, but maybe it’s still possible to find romantic fulfillment without a partner

One year ago, I could feel my stomach tying up in knots as I watched Bumble download onto my home screen. At the time I chalked it up to the excitement of dating again, but looking back, I realize it was my nerves kicking in. I was unsure of just how successful I would be on this dating venture, and I didn’t know what to expect. Being an 18-year-old who had just moved out to a new city and discovered newfound freedom, I felt like I was finally ready to branch out. I figured: what better way to do that than through a dating app? So I threw myself into the dating scene with no expectations (just vibes).

I began, like most people do, by absentmindedly scrolling through potential matches, skimming through bios and photos–some taken with their pets and others while on vacation (when that used to be a thing). Eventually, one person caught my eye. He was also a media student living in Toronto. There wasn’t much else that appealed to me though; I only vaguely remember his profile now a year later.

Regardless, I swiped right, my heart lurching when I realized I’d just made my first match. I played it safe, engaging in a friendly introduction and making small talk about our hometowns. I cringed trying to come up with more questions, grasping at straws to keep the conversation alive, only to find myself coming up short. When I didn’t get a response after a while, I moved on to try and find another match. 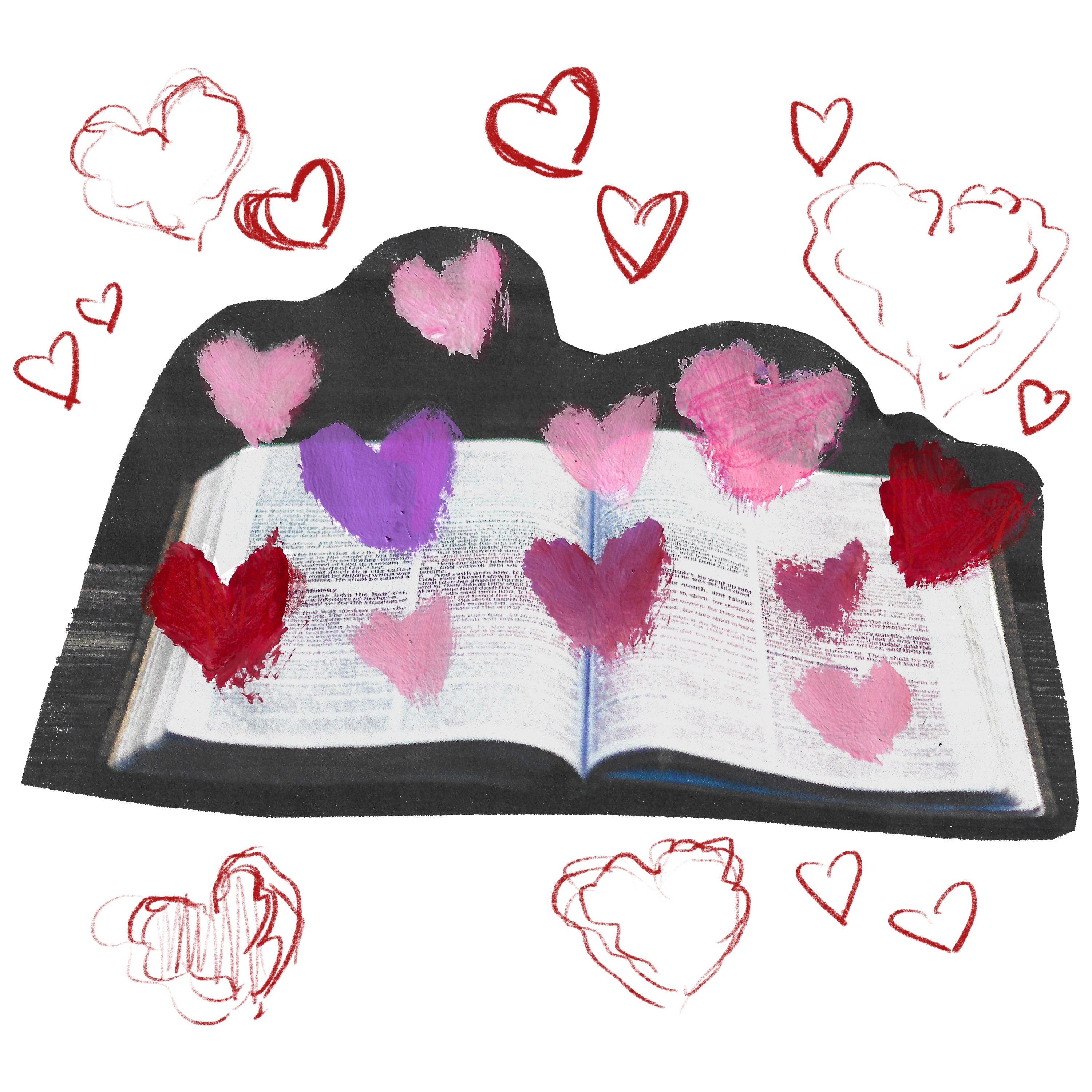 While I had a few nice interactions, I mostly found myself detached, fumbling through painstakingly forced conversations. My optimism was draining with each swipe: was I coming off as too desperate? Trying too hard? Or maybe I wasn’t making interesting conversation? Was asking about his hometown too boring? The self-monitoring was exhausting.

I deleted Bumble within a week, almost as quickly as I decided to download it. I was forcing myself to make connections just for the slightest chance at a relationship, but I wasn’t actually enjoying it. I could finally feel relief as the knot untied itself, and I decided I would seek out other ways to meet people. After all, there would be plenty of time to meet people in 2020.


While dating apps make things much easier in terms of filtering and meeting multiple people, it hasn't necessarily made building a real connection easier or more enjoyable.

In 2016, it was reported that over 50 million people used Tinder, the average user checking the app up to 11 times per day. Despite research showing that dating apps are an increasingly popular way of finding “the one,” it hasn’t resulted in an increase in dating success.

A recent study by the Pew Research Institute found that more than half of American adults say that dating has become harder in the last decade.

For a generation hyper-focused on staying connected, people are becoming disenchanted with online dating. Maybe you feel forced as you try to make a good impression with someone who is essentially a stranger, or maybe online dating has left you with “swipe fatigue,” an increasing phenomenon among the younger generations.

Swipe fatigue occurs when individuals achieve little to no success on the dating apps they’re using. Instead, they only use the apps to reach out to matches as a last-ditch effort to find validation, without receiving any long-term gratification.

The end result is the user deleting the app, only to redownload it at least 48 hours after the fact, which can only be described as a Black Mirror: Bandersnatch hellscape.

Pre-COVID, the plight of single people was deciding between finding a partner through online methods or attempting to do so in real life. Unfortunately, no one could take into account a global pandemic shutting off any possibility of romance, be it online or off.

Throughout the multiple lockdowns and calls for quarantine, I found myself coming to the realization that dating without physical closeness, more specifically online dating, was our new normal—one that didn’t work for me.

Despite having settled into my singledom, I still felt an emptiness and longing for romance. I missed going on dates, having inside jokes with another person and just the simple feeling of cuddling someone for long periods of time.

Even if I wanted to go back to Bumble, I’d still have to stay six feet away from my match, when the key aspect of any first date is closeness to another person. Everything had changed and no one was quite sure how to move forward. Almost one year since the first lockdown in Ontario, we’re still grappling with how to conduct ourselves when public health is telling us to stay apart and stay home.

Helen Fisher, an anthropologist known for her research on relationships and attachment, wrote in a 2014 paper that “feelings of intense romantic love” engage regions of the brain’s reward system associated with “energy, focus, motivation, ecstasy and craving.”

So despite our best efforts, we can’t really avoid longing for love and attachment. But can we satisfy these feelings in a world that’s telling us to stay distant from one another?

My solution: I looked to Lady Bird and Florence + The Machine (I have a particular soft spot for “You Got the Love”) for that feeling of weightless freedom, when your heart feels like it’s glowing and you're finally at peace with yourself. Not because you’ve found your other half, but rather since you’ve found a good person with whom you can share the good, the bad and the just plain weird parts of yourself.

As we entered the ten-month marker of this pandemic, rom-coms and cheesy Hallmark movies filled my Netflix watch list. While it was entertaining to make fun of the cliché meet-cutes (seriously, who falls in love with a person after nearly hitting them with their car?), it was also heartwarming to see couples slowly grow closer and build a relationship. 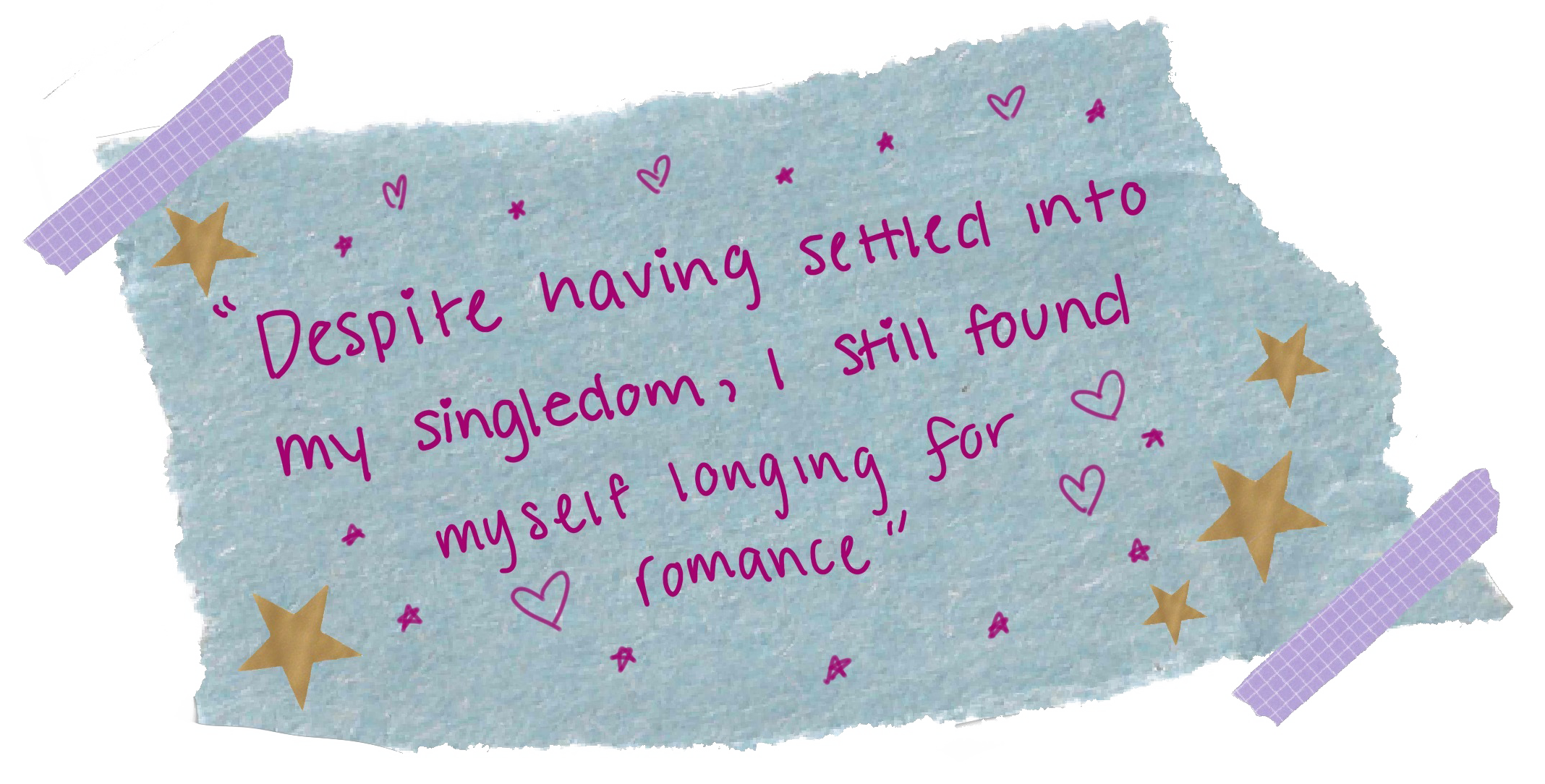 One movie stood out: Isn’t it Romantic. Setting itself apart from most films of the genre, the plot finds its main lead, Natalie (Rebel Wilson), transported into an utterly ridiculous world filled with rom-com clichés from the 1990s. Love at first sight, the rich businessman using a limousine to woo the lead, pitting two women against each other; they covered it all, just satirically. It flipped all the classic tropes to convey a strong message about self-love and acceptance for a modern audience.

The satirizing of rom-coms was refreshing to see, but what I enjoyed most was seeing how Wilson’s character embraces parts of the rom-com, like breaking into a musical number and overdressing for her first date with Blake (Liam Hemsworth). Seeing her having fun in spite of herself has never been done in the genre; Natalie gets to briefly live a life she was always told wasn’t meant for her. While she still holds to her beliefs, the journey of self-acceptance taught her to boost her own confidence and ask for more in her life.

The movie was so good that I found myself turning to it multiple times after the first viewing. It reaffirmed that self-love was the most important thing to grasp before beginning a relationship.

The last decade has shown a dramatic shift in the rom-com genre. With the rise of internet communities on social media platforms, pop culture has changed the way people view the genre. It has also allowed them to demand more from it as audiences express their expectations and desires for romantic media.

Dr. Shana MacDonald is an associate professor of communication arts at the University of Waterloo who specializes in film, media and intersectional feminism within digital media. She describes social media and streaming services as the “perfect confluence” for romantic comedies to thrive, as high demand for the genre online is recognized by streaming platforms.

“I always argue as a media studies scholar [that] movies, but also hashtags, memes, TikTok videos—are a way of taking the temperature of our culture,” says MacDonald. “They're the way of telling us where our anxieties are and where our desires are and what we are craving.”

Netflix recognized that rom-coms are easy to make, as low-budget films have the potential for high returns. Macdonald says Netflix saw there was traction to be gained from the genre a year and a half before the pandemic, which is why they focused on producing shows like Love is Blind and Too Hot to Handle in a pre-COVID world. 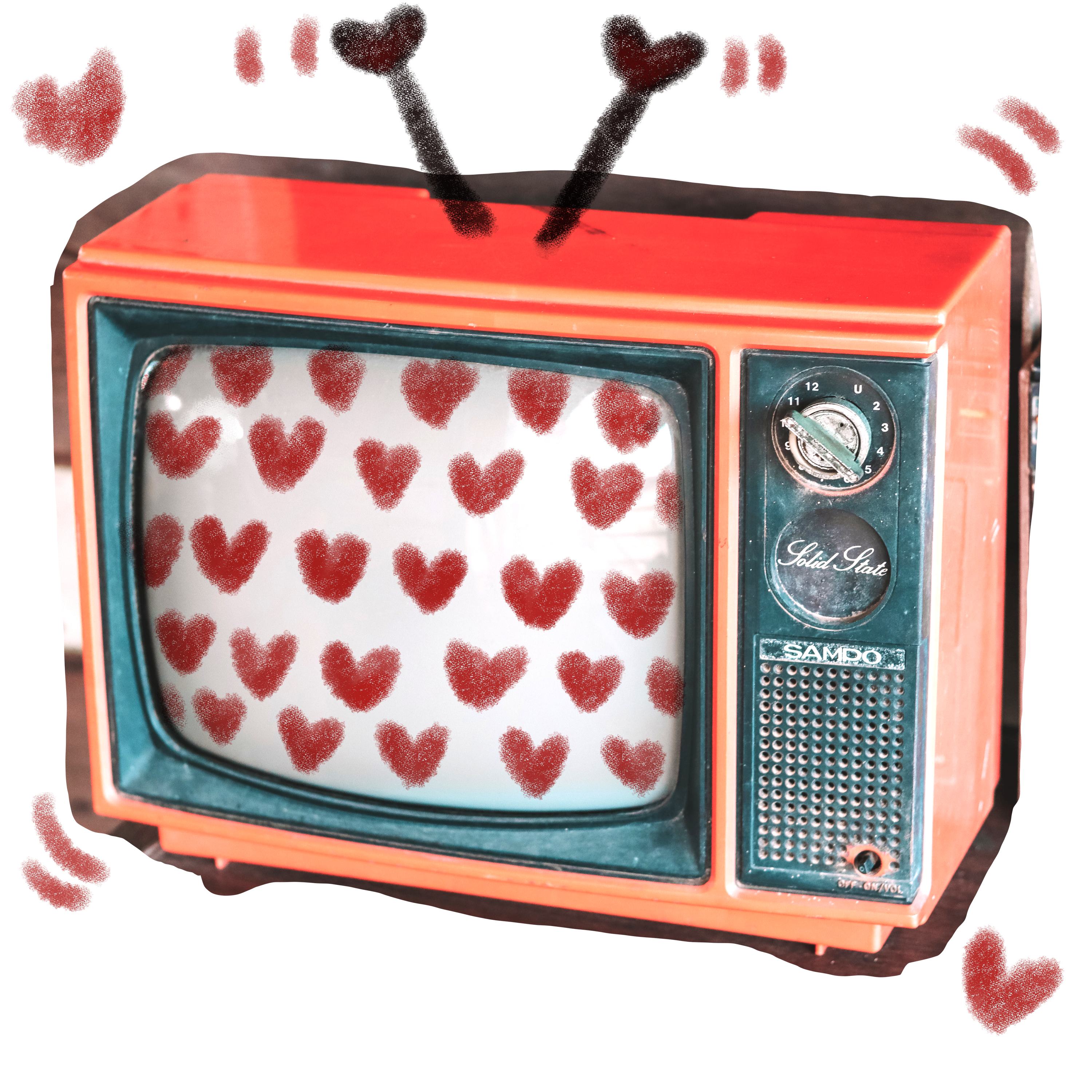 “You're seeing streaming services respond in kind and giving us this type of entertainment that doesn't ask a lot of us and gives us pleasure,” MacDonald says. “I think that on the scale of coping mechanisms, it's a pretty decent one, it's not destructive.”

Although she believes that romantic media can instill unrealistic expectations and cliches, the internet has opened up a channel where dialogue between showrunners and their audience has become more transparent.

MacDonald explains that because more women are getting involved in the production process behind these shows—be it as producers, showrunners and writing staff—they’re rewriting the script on the romance genre.

“A certain set of ideas that push against rape culture, that believe in women's right to choose to have pleasure [and] have consent, [are all] coming into romantic comedies in ways that I think are really positive and exciting,” she says.

With the pandemic, consuming media has become normalized as a coping mechanism. While it may not be a perfect solution in the long-run, it’s a perfectly healthy and non-destructive habit for now.

If our anxieties and fears are showing up in the media that’s being produced, then perhaps we can confront those fears through online communities who share a love for love on screen. There is something almost nostalgic about romantic media—it reminds us of a time before COVID-19, a time that we all took for granted.

When I joined Bumble, I didn’t take into consideration my own comfort. Through consuming media, I’ve allowed myself to figure out what I want and need in a relationship, with a greater understanding that I need to assert those things to be truly satisfied.

While I may not be ready to date or try online dating again, I’m confident enough to admit that it’s not something that I like, and that’s okay. You can exist within dating culture and romance without venturing into online dating. Whether you choose to enter and exit that sphere is a personal matter, one that should be based on the comfort and security of a person.

Until then, I’m satisfied watching Rebel Wilson affirm that she’s enough while asserting herself within her workplace and opening herself up to the possibility of love.